My girl has been visiting us in KCMO, and we are enjoying the adventure of sharing this city with her. It really is a fantastic place!

Last night we ended up having a GNO, because my honey had a fancy work dinner. He sometimes gets to do those kind of things. We decided she needed some good bbq. Our first bbq adventure this trip was a new to us place highly recommended by a native Kansas Citian. It was a failure. So, we had to have a bbq redo at Q39 (they have yummy meats, tasty apple coleslaw, and amazing macaroni and cheese!)

On the drive to the restaurant, we came across some road construction which brought our road down to one lane – one very slow lane – so I took a detour. It ended up being a marvelous detour!

This made me think of the times I have had a path planned in life that God decided to detour.

overseas to staying in the states

living in a Dallas suburb to living in downtown KC

Each of these detours has brought significant beauty to my life and relationship with God and others.

The change in my major opened a door for me to teach middle school Bible at my alma mater at just the time I was looking for a job opportunity. That is a LONG story on its own, but evidence of God’s kindness and sovereignty. My change of degree plan in 1987, at the end of my sophomore year in college, was clear preparation for a job that would present itself 16 years later. 16 years! That is a detour! A God sized detour!

After college I spent time overseas. Upon my return I began making plans to return overseas after some ministry training in the states. God brought an incredible man into my world, detouring those plans. This fall will mark 25 years of ministering alongside that man. Twenty-five years of serving God in each place he has dropped us. Twenty-five years! What a beautiful detour God has given me.

(It would be very remiss of me not to mention the two blessings that joined us during those 25 years – they are pretty cool!)

We lived in the same house for 21 years, raised both of our children there, and planned to be there at least until Doug retires. God moved us to KCMO where He has given us more than we could have asked for. It is still early in this detour, but I already see so much beauty. God is opening doors for community, ministry, and spiritual growth in a most wonderful way – in a way only a God detour can do.

As I share examples of detours in my life I wonder

How many times have I missed beauty because I just had to stick to the planned route?

How many times have I missed relationship because I was stuck to my plans?

How many times have I missed sweetness with God because I avoided a detour?

How many times have I seen a God detour as

What are some detours God has taken you on?

Are you experiencing the frustration of a detour today?

Join me in trusting and thanking God today – He knows the path of this detour.

Join me in delighting in His purposes.

Many are the plans in the mind of a man, but it is the purpose of the Lord that will stand – Proverbs 19:21

This thought crossed my mind recently when I was at a women’s conference in Indianapolis. (I realize that “cool” isn’t a very “cool” word to use these days, but I am pretty sure nobody is accusing me of being “cool” anyway.)

I was walking through the rather large bookstore set up in the exhibit hall and saw this book and thought, “I know her!” 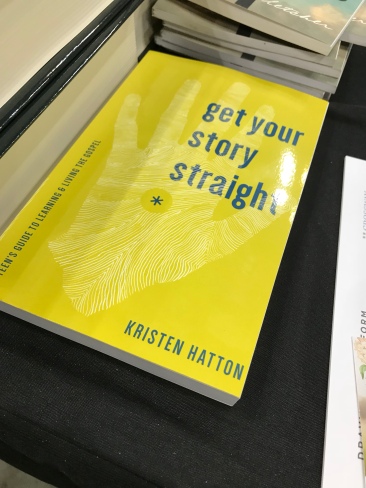 And, you should too! You can follow Kristen on her blog. She has written a couple of books and has a new small group bible study on Exodus coming out on the 23rd of this month. She is an amazing child of the King who is allowing God to use her for His glory. That is cool!

Another friend of mine recently published an e-book, For Right Now: Jason’s Story About Foster Care. Erin has a degree in Social Work and has a beautiful heart for foster children and families impacted by foster care. I would recommend this book to anyone who is involved with the foster “system” (and even those who aren’t who desire to have a better understanding.) Erin was one of “my” youth in Sunday school who has become a friend. She is being used by God to make a difference for Him in many lives. That is cool!

Thinking of these two friends who are a bit more public in their cool factor, I was reminded of some of my friends who are faithfully and obediently living in the power of the Holy Spirit right where God has placed them.

I have a friend who is finishing her undergraduate degree after years in the work force. God is using her to love and mentor young women who cross her path on the college campus. That is cool!

I have a friend who regularly speaks words of life into my heart and into the friends God has placed in her world. That is cool!

I have a friend who is a cancer survivor, continuing to feel the impact of chemo on her body, who is regularly taking care of others around her in God’s strength. That is cool!

And then there are these friends who are daily walking by faith:

To each of these friends trusting God in their circumstances I can enthusiastically say, “That is cool!”

As I sit here processing how blessed I am to have each of these people in my life, I am reminded that it is really my God who is the cool One, the amazing One, the awesome One. I love how He gifts His children for His work in His world. I love how He reminds me of His character through the lives of each of these women.

I love how His gospel is being proclaimed throughout the world in both big, public ways and simple, daily ways.

My prayer today for each of  my friends and for you who read this is:

“Now may the God of peace who brought again from the dead our Lord Jesus, the great shepherd of the sheep, by the blood of the eternal covenant, equip you with everything good that you may do his will, working in us that which is pleasing in his sight, through Jesus Christ, to whom be glory forever and ever. Amen.” (Hebrews 13:20-21)